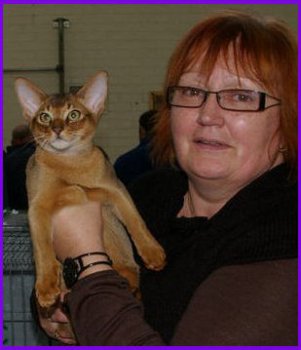 Since childhood I have always owned and cared for cats and in 1979 cat fancy became a consuming interest when I purchased my first Burmese.
This first Burmese, Catani Manikato, became a top show and stud cat taking out Best of Breed at Royal Melbourne Show three years running, becoming a Great Grand Champion.
Within a short time I had purchased a delightful kitten by the name of Adena Tiekara, After gaining her Grand Championship status, Tiekara was mated to Manikato and produced a number of litters, progeny from these litters included Grand Champion Fernhill Crystal Brook and Grand Champion Nikita, from here I continued to breed and enlarge my colony of Burmese.
As a matter of course, my interest in Burmese involved me in the Burmese Cat Society for which I served as Secretary during the early eighties and during this time, I also trained to become a steward and served in this post for seven years.
As time progressed, my Burmese stock was growing older and of course, showing with less frequency. In the late 80’s with my interest in cats broadening, I applied to become a judge and on the completion of three years of study, I qualified as Shorthair (Group 3) Judge in 1990.
An essential pre–cursor to acceptance as trainee judge, one must have more than one breed in the cattery – this was my introduction to the wonderful world of Rex.
This unique breed with its origins in the British Isles has proved to be of increasing favour with cat fanciers Australia wide, myself no exception with a particular interest in Devon Rex.
In 2004 I completed the Group 2 Judging training course. This opened another interesting chapter in my lifelong association with the FCCV and allowed me to enter the wonderful and exciting world of the Siamese and Oriental Breeds
I have enjoyed judging at The Royal Melbourne Show, The FCC Open, several rural Victorian Shows and many interstate events. My involvement with the FCCV spanned twenty interesting years and now as a member of GCCFV I look forward to further input to this most interesting and satisfying aspect of the feline fancy.
To contact me:
Denise Spurrell
1715 Don Road,
Don Valley, Vic.
Telephone: 0411 063 018